Online orders to be placed by those over the age of 18 only. Dismiss 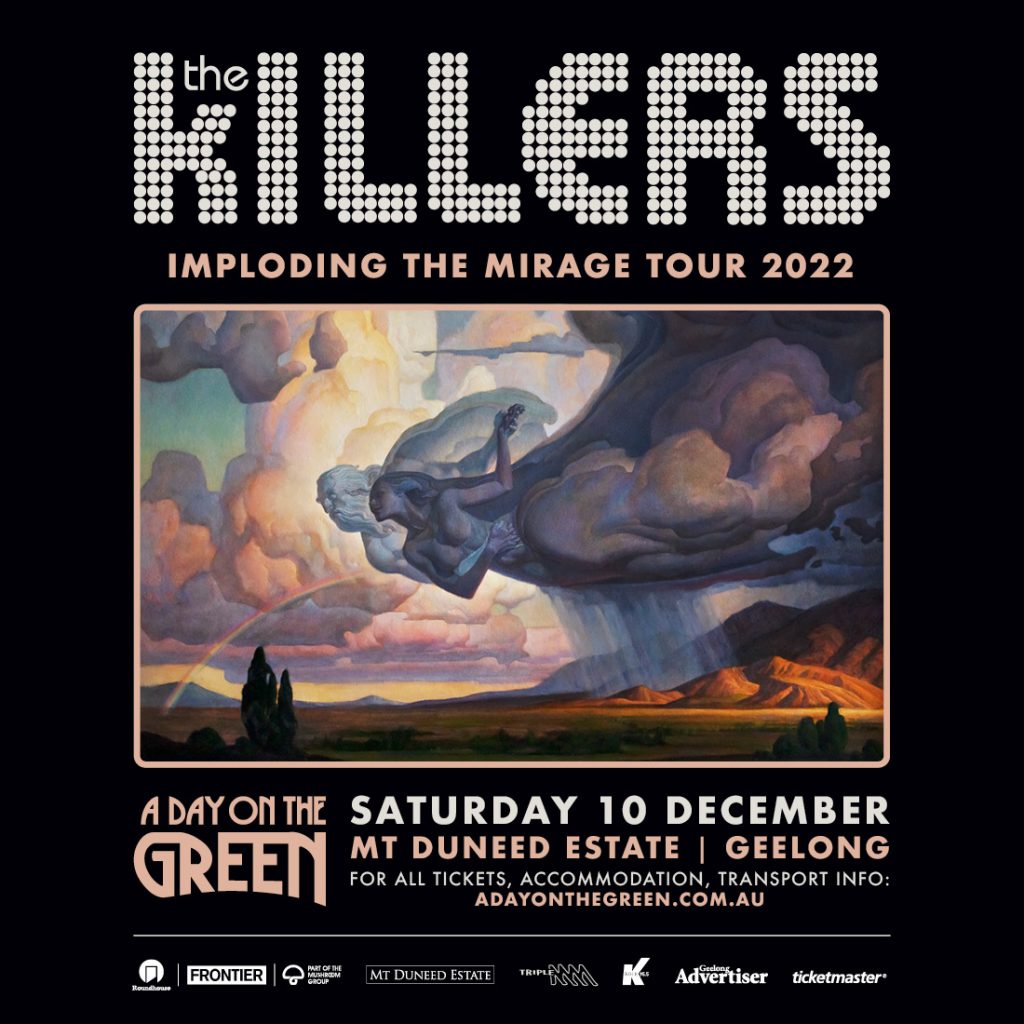 We’re back! After the toughest two years in a day on the green’s 21-year history, Australia’s favourite outdoor concert event is proud to announce its return with the a day on the green debut for one of the biggest live bands in the world – THE KILLERS.

Roundhouse Entertainment and Frontier Touring are thrilled to welcome THE KILLERS back to Australia and New Zealand for a massive nine-date mix of arena and outdoor shows on their Imploding The Mirage Tour 2022 in November-December. Originally announced in 2020 when COVID first halted worldwide touring, this will be The Killers’ first time back on our shores since their 2018 Australasian tour which included ten completely sold-out arena shows.

The tour will see THE KILLERS make their a day on the green performance with us on Saturday 10 December, 2022.

THE KILLERS will play headline shows and festivals across the globe in celebration of their sixth studio album, the critically acclaimed ARIA #1 album Imploding The Mirage (out now through Island Records/Universal Music Australia).

“The Killers are the pinnacle of live music performances and should be seen for both the spectacle and showmanship of the band.” – The Advertiser

Earlier this year while touring was still on hold due to the pandemic, THE KILLERS released their seventh studio album, the quieter, character-study-driven Pressure Machine.  It’s an aural document of growing up – and living – in the American Southwest, told from a myriad of perspectives.  Pressure Machine includes Quiet Town and Runaway Horses (featuring Phoebe Bridgers). The band performed album track In Another Life on The Late Late Show with James Corden.

Imploding The Mirage was self-produced by the band in partnership with musical engineer Shawn Everett (The War On Drugs, Kacey Musgraves, Beck) and Foxygen multi-instrumentalist Jonathan Rado. The album, as a whole, is heavily influenced by the likes of Kate Bush, Peter Gabriel, Bruce Springsteen and New Order and was a return to the Heartland Rock sounds of much-loved albums like Sam’s Town and Battle Born. The list of featured artists includes Lindsey Buckingham, k.d. lang, Weyes Blood, Adam Granduciel (War On Drugs), Blake Mills, and Lucius.

“If Wonderful Wonderful was an arm around a trembling shoulder, Imploding The Mirage is a raised fist to the future. It’s the sort of attitude that could help us all endure such trying times, and The Killers’ sixth album sounds unbreakable too. They long ago reached their natural pumped-up radio rock peak, yet here sound as though they’ve been hitting the sonic steroids. The Killers have made another dazzling statement of ultra-modern pomp, and one arguably even more in step with new generations of alt-rock. It’s a musical DeLorean: rooted in mainstream Americana but speeding into adventurous horizons.”  ★★★★ – NME

THE KILLERS first burst onto the scene in 2004, topping Australian charts and going double platinum with debut album Hot Fuss. Featuring hit singles Mr. Brightside and Somebody Told Me, the album received instant popularity and widespread international success. Since then, the band have sold more than 30 million albums worldwide, and headlined all of the world’s top festivals including Coachella, Lollapalooza, Glastonbury, and received countless accolades, including multiple Grammy nominations, American Music Award nominations, MTV Video Music Awards and NME Awards. THE KILLERS have amassed more than 393 million streams and sold more than one million albums (and counting) in Australia alone!

On the very same day that 2017’s Wonderful Wonderful hit #1 on the ARIA Album chart, the band took to the stage at the hallowed Melbourne Cricket Ground for the 2017 AFL Grand Final and absolutely nailed their set:

“The Killers’ set has already started to be considered as one of the greatest AFL performances.” – Tone Deaf

THE KILLERS are exceptionally well-loved Down Under with all ten shows on the band’s 2018 tour completely selling out.

Live music is back and we’re thrilled to welcome fans back to a day on the green to celebrate our 21st season. Secure tickets now for these not-to-be-missed shows.

IMPORTANT INFORMATION
Patrons are advised to purchase tickets only through authorised ticket sellers. We cannot guarantee any ticket purchase made through any means other than the official ticketing agents listed on the A Day On The Green, Frontier Touring and winery’s websites

a day on the green is Licensed All Ages. Strictly no BYO alcohol. Food will be available on site or BYO. EVERY patron must have a ticket regardless of age, and under 18 patrons must be accompanied at all times by a responsible adult with their own ticket. For all transport, accommodation and event information, go to www.adayonthegreen.com.au

includes Front GA Standing ticket, and drinks and dining before the concert, VIP parking and drop off, and the best way to have a killer time

*A handling fee per transaction applies.

ABOUT A DAY ON THE GREEN

2022 marks the 21st season of a day on the green, which started in January 2001. After 490 shows and more than 4 million happy patrons, the a day on the green experience of good food, fine wine and great music in magnificent locations remains unrivalled and is firmly established as one of Australia’s most popular and premier outdoor concert events.

For a day on the green MEDIA information: