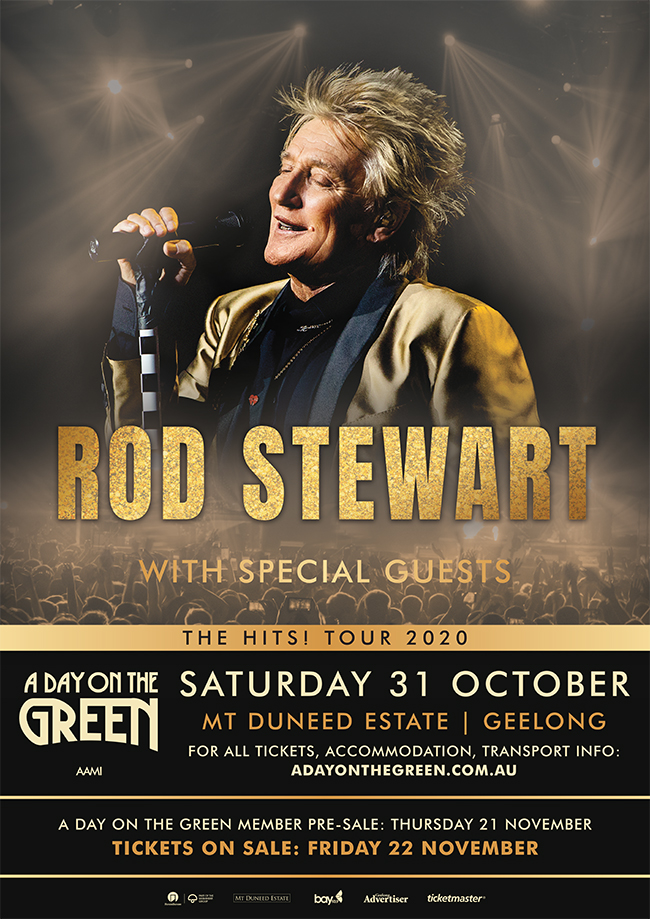 RETURNING TO AUSTRALIA IN 2020

WITH THE HITS! TOUR

A 50-YEAR CELEBRATION OF HIS STELLAR CAREER

SIR ROD STEWART returns to Australia for an eight-date tour across the country, playing both arenas and a day on the green winery dates.

Roundhouse Entertainment, in conjunction with Live Nation, is thrilled to announce the legendary singer will make a welcome return to a day on the green, performing at Mt Duneed Estate in Geelong on Saturday October 31.

Still at the very top of his game, ROD STEWART has followed a triumphant stadium tour this UK summer with one of his biggest UK tours ever, with live performances running through November and December of 2019. In addition, he has also toured the USA, with highlights including headlining a series of shows at Caesars Palace in Las Vegas as part of a multi-year residency and adding a third sold-out Hollywood Bowl concert in LA for a landmark reunion set with his former bandmate Jeff Beck.

Warner Music will honour the legendary singer with a new album to be released November 22 which will allow fans to hear Rod’s biggest hits with his classic vocal style set to full orchestral arrangements. You’re In My Heart: Rod Stewart With The Royal Philharmonic Orchestra pairs classical vocal tracks from his most popular songs with new arrangements performed by The Royal Philharmonic Orchestra.

In 2019, SIR ROD STEWART celebrates 50 years as a solo performer. The iconic artist is one of the best-selling music acts of all time, with more than 250 million records sold worldwide during a stellar career that includes an incredible 27 Top 40 hits in Australia, including four number one singles, plus seven number one albums.

Sir Rod’s incomparable catalogue includes classics such as You Wear It Well, You’re in My

Infatuation and Maggie May.

ROD STEWART has received all of the music industry’s highest honours, including two inductions into the Rock and Roll Hall of Fame (solo and with the Faces). He was also proclaimed a GrammyTM Living Legend.

In 2016 he officially became “Sir Rod Stewart” after being knighted at Buckingham Palace for his services to music and charity. He has performed for millions of fans on all seven continents, even holding the record for the largest-ever free concert, for an estimated 4.2 million in Rio de Janeiro on New Year’s Eve in 1996.

Special guests to be announced.